Scroll down for text and embedded videos. Please allow a few seconds for the videos to load. The video sound will play automatically and can be muted individually.

As part of a multi-disciplinary practice, Beth Frey makes touchingly self-deprecating and playful videos that are highly relevant reflections of our uncertain and stressful times. These videos are situated at the intersection of drawing, augmented reality, selfie culture, and green screen animation, made and distributed through social media apps like Instagram and Snapchat.

I discovered Beth and her video work through her IG stories. She was living and working in Mexico City just before the COVID-19 pandemic swept the world. Rapidly and deftly her selfie stories on Instagram became more and more absurdly compelling, collaging her adroit, sugary drawings and watercolors over her preening and spoofing performances. The range of satire was relentless and covered territory from internet memes like “woman yelling at cat” to art history top ten favorites like “Las Meninas.” I was amused, impressed, deeply curious wanted to know more so I reached out to her for an interview with Vantage Art Projects. I learned that despite becoming more visible thanks to Instagram during the early part of 2020, Beth’s foray into video artwork had actually started several years before the pandemic in what she describes as two chapters.

The first chapter came about in 2017 while undertaking an artist residency at Struts and Faucet in Sackville, New Brunswick. Beth knew during this residency that she wanted to start working with video and started to shift from her usual drawing and painting to video production. The videos made at Struts and Faucet featured Beth as the sole performer and included elements of surrealism, but didn’t have the extent of altered and augmented reality found in her current work. After the residency, she took a week off, traveling around the East Coast, and was playing with Instagram stories while couchsurfing at a stranger’s apartment. On Instagram, she discovered the “sticker” feature where you can photograph parts of yourself and stick them onto the video story. She made and posted a string of these videos, using parts of her body to create surreal characters — you can see some of these early videos on her IG account @bf_selfiehouse. After making these for a few months, she felt she’d exhausted the limits of the sticker feature on IG and was frustrated by some glitches in the app that wouldn’t allow her to do what she instinctively wanted. She knew also that she wanted to go even further and to “be” the art and to inhabit the world she was drawing and painting.

The second chapter came about in late 2019 which was also around the time I started following her IG stories. In Mexico City, Beth had started working again with video, apps, and green screen. She also started to integrate her existing watercolour artworks into the videos using various background and foreground “swap” functionality. In March 2020 when Covid suddenly became a reality in her life, she left Mexico City and found herself back in Nanaimo, BC in her mother’s apartment. Once back in Canada, it was difficult to focus on her normally labour-intensive watercolours and returning to playing with social media apps offered a welcome creative release. She set up a green screen in her mothers kitchen, added a few more apps to her phone, and continued to create and publish the videos we see today on both on both @bf_selfiehouse and @bethisms.

All of Beth’s work, not only these social videos, are underscored by humour, parody and exaggeration. There are also aspects of shame and “cringe” running through her oeuvre, including potty humour about bodily functions (such as “A Costume for Peeing in Lakes” (2013) or “Reimagining Yesterday’s Conversation (and sounding so much cooler – 2019)). Artworks can be seen below. 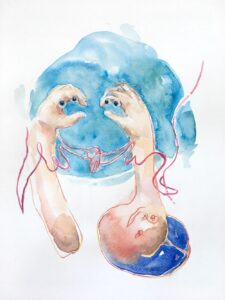 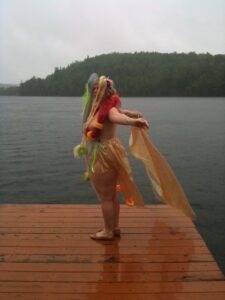 Humor has always felt second-nature to Beth, especially in regards to self-representation. She admits that in some ways she uses self-deprecating humor to make sense of the world or to reveal the contradictions of our day-to-day life. This self-reflexivity makes it easier for Beth to both comment on the world at large while also looking inward.

I asked if the pandemic, specifically when she was becoming increasingly isolated in Mexico before coming back to Canada for lockdown, had any direct influence on the content of the videos. She said that in a few of the first videos which were made with green screen and without drawings, she included two versions of herself in a single video. These were definitely a response to the interpersonal isolation in a “be your own best friend” sort of way. Beth was thinking about the impact of the necessary distance between people during the pandemic and the resulting lack of “touch”. Making the videos felt therapeutic in that by way of doubling herself she was able to create a virtual sense of touch and companionship.

Beth has been drawing for most of her life and drawing forms a fundamental element of her studio work — however, digital video is still a relatively new medium to the artist. The videos merge Beth’s drawing-based practice with what I would call a “selfie practice” which for her is a direct extension of her drawing practice. When asked about the relationship of the video work to film and animation, Beth further explained that she feels like the combination of drawing and video merge into a form she calls a “moving drawing”.

These moving drawings are also performances in which the artist plays, if not the only character, all of the characters. I asked Beth about performance and its relationship to her character-based portraiture. Although her work has long toyed with self-representation and she thinks that most art is self portraiture, Beth never really considered it a part of her practice. In 2018 she did a series that in hindsight could be seen as a precursor to her work with face swapping apps. In these works she incorporated her own image into the work with a kind of “cut and paste” method where her face didn’t exactly fit into the rest of the drawings. She also shared that during her MFA thesis defense, when she presented a full gallery installation of sculptures and drawing, the jury’s favorite artwork was actually a webcam selfie. This wasn’t a part of the artworks in the gallery but was something she had included in a PowerPoint presentation for the defense. The unexpected and overwhelming positive feedback made her realize there were ideas in her webcam recording that should be explored further.

Frey is still wrestling with the question as to how these videos relate to her other artworks which include drawings, paintings, and installations including 3D work. It has taken her a while to even consider the videos as a part of her practice and not just something fun she did on social media. Also, as a novice to video art, she wasn’t sure about how to present the videos outside of social media networks. However, the videos are starting to not only stand on their own, but to also influence her 2-d artworks. She’s slowly started to bring self-representation and references to social media into some drawings. She’s also looking further at connecting drawing to video through world-building and the creation of characters that appear in both mediums. Longer narratives and videos longer than the limits set by social media apps are also in the cards. How to distribute the videos is another consideration. She recognizes that a silver lining of the global pandemic is the fact that online viewing has become the current default, and that this is highly pragmatic for sharing digital video. However, due to her 2D art background, she still has an attachment to the white cube gallery space. Beth would love to see the videos presented with the accompanying drawings as a more traditional gallery installation with the videos either projected or still within their native habitat of a small screen. In the meantime, and for your viewing pleasure, we’ve embedded some of our favourites on this page.

About the artist: Beth Frey was born in Calgary, Alberta, and raised and schooled on Vancouver Island, BC, Beth Frey now divides her time between Montreal and Mexico City, where she creates drawings, videos, and sculptures. Frey uses an absurdist sense of humour and an element of play to approach her subjects, be it girlhood, the body, social media, and that foreboding sensation that the apocalypse is like, really really near. She has an MFA in Painting and Drawing from Concordia University, and a BFA from the University of Victoria. Frey has shown across Canada as well as in Mexico, the US, and Morocco. Her website is: www.bethfrey.com and her Instagram profile is: @bf_selfiehouse.

About the writer: Jennifer Mawby is a contemporary artist and sometimes curator and art writer with a focus on projects for artists using accessible language. Jennifer is the co-founder and director of Vantage Art Projects. Her work can be found here: www.jjtmstudio.com and on Instagram: @jenniferjeanmawby.