A conversation with Jenny Herrick and Jane O’Neill. 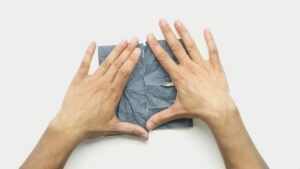 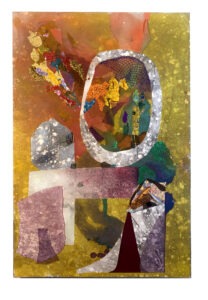 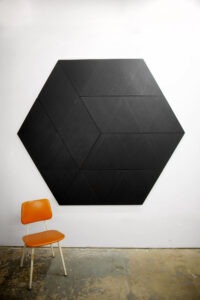 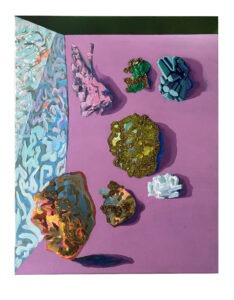 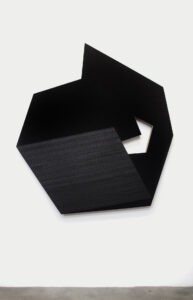 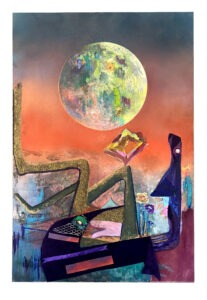 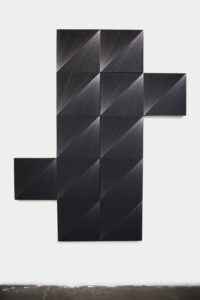 Pairing us up for a chat may seem odd when you look at our work, but we have more common ground than one might initially think.

Jane: If I had to compare us in terms of process (and premeditation), I picture us teamed up in a bar fight: I’m wildly swinging the shardy end of a broken bottle everywhere, causing chaos and mass destruction to take out just one opponent while you quietly study the infrastructure, pick a key spot to throw a dart at the circuit box, causing a silvery network of explosions that stops the fight, capturing everyone’s attention before the power goes out and shuts down the entire scene. I see in your work what I imagine is tireless and precise preparation, and in viewing your drawings and paintings in person, an astounding level of craft in your execution.

Jenny: This is the precise reason I envy your work as well as your words. Both are so lush, narrative, descriptive and indulgent. Yes, I can throw darts, but by the time I even begin to strategize a 9-point finish, you’ve already taken out the enemy in spectacularly theatrical form and convinced them to buy you a drink. To work with such spontaneity, improvisation and (apparent) ease… You have set up parameters for yourself in which almost anything is possible, taking the most quotidian of materials (mostly found or donated) and utterly transforming them into objects/images/forms that elude definition. You effortlessly create a controlled chaos that sits at this fascinating intersection of abstraction and representation. I recognize the components but am left without words to describe the images, how they came to be or what they infer. It is as though they were conceived in a language foreign to me. It is, in part, this intangibility that makes them so very seductive.

In terms of subject matter however, I think we grapple with some of the very same ideas; the concrete nature of time, the infinite nature of space, our relationship to the physical world (and the stuff in it) and the role of performance in making. While in my practice these ideas evoke futility, in yours, they evoke hope.

Jane: Hope. Ha. I’ll take it. I need it! The things I work with may not seem to belong together, certainly not in the space of a more traditional painting. I like the nod to performance in each of our practices. Artmaking is often such a covert operation, so attaching evidence like fishnets, candy wrappers, glitter (and sometimes googly eyes) maybe speaks to the sensuality and awkward truths of living, of craving and satiating desire, of making and looking at art.

Jenny: I’ve heard you talk about this idea of mottainai, the centuries old Japanese term which imbues objects with meaning and owners with a responsibility to respect and reuse them. I love this idea in relation to your work–mesh fruit wrappers, other people’s paintings and a broken bathroom mirror all become characters in these enigmatic narratives. And while the actions in my works attempt to record the passage of time, it is the objects in your works which do so.

Jane: Understanding mottainai through a continuous study of Japanese art and culture has been powerful. It roughly translates to “do not waste what is valuable”. So human consumption and the climate crisis (another area in which we overlap!) are often associated with this concept, but it can also apply to aesthetic choices and even opportunities in life.

Speaking of materiality, I greatly admire the quiet coding of elements embedded in your work, how the chemical compound of graphite is a crystalline form of the element carbon, the atoms of which are arranged in a hexagonal structure. I love that oblique representation of its physical form in some of the compositions of your drawings and paintings.

I am also trying to parse the differences in terrains between your filmmaking stance and your static picture one. The films seem to emphasize sustained motion or activity, evincing a meditative quality that either magnifies or suppresses our sense of time and scale. I cannot stop watching Limits of a Function, I love it so much. It references some of the great endurance performances of the 1960’s and 70’s, and maybe also scratching some kind of itch related to unboxing videos? It is all about this consistent, mesmerizing action with no “release” or object-reveal. How satisfying it is to see crisp paper turned back into soft fiber and into almost nothing as it begins to decompose in your hands.

Jenny: Shucks. So I used to make more narrative paintings and drawings, but the videos have sort of replaced those impulses. And once I started with the videos, a place to explore time, space and endurance through abstraction opened up. So yeah, I jump around, but it’s the same idea, time and again…

Over the years, I’ve seen you fluidly move from painting to installation to photography to sculpture, all while maintaining a continuity of voice and vision through your use of repurposed materials. I see the current works as coming back around to painting (which you’re so good at!), but dragging with them the vestiges of the other media.

Jane: I appreciate this observation. I struggled for years trying to figure out which “camp” I belonged to. Turns out, I never had to decide. My ‘material polyamory’ guides me from medium to subject and back again. I no longer worry about working across various bodies and themes, and felt this convergence happening over the past year that’s given me the freedom to produce with fewer concerns over integration and process. It’s lighting a clearer, more exciting path. I don’t always know what’s next, and if I move seemingly backwards (or cyclically sideways?) in order to go forward, that’s OK. Maybe that’s my version of playing with or recognizing time in my work. What about you? What’s next? What projects or things are you looking forward to making/showing?

Jenny: I’ve been really interested in deep time, and I’ve a drawing/photography project in the mix which addresses past extinction events. What about you?

Jane: I cannot overstate how much I want to see deep time from your mind and hands. I’m reviving my curatorial work under the name LionEyes, and I’ll be showing an amazing group of artists at Other Places Art Fair in September 2021.

Thanks so much for this conversation, it’s been really Illuminating and inspiring!

About the artist: Jenny Herrick is a Los Angeles-based artist whose practice encompasses painting, drawing, printmaking and video. Her work has been shown internationally. She holds an MFA from Yale and is a professor of art and design at Whittier College.

About the artist: Jane O’Neill’s work has been shown in commercial galleries, artist-run and nonprofit spaces as well as academic institutions on the northeast and west coasts of the United States. She studied at New York University, the Yale Norfolk program, and received an MFA in painting from Yale University. O’Neill recently launched her ongoing curatorial project LionEyes and is currently based in Los Angeles.